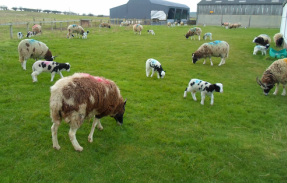 Some of the current ewes with their lambs
The Whitley Flock consists of 35 four horned breeding ewes, originally started in 1984 for cross
breeding with a Suffolk ram. In 1989 the decision was made to breed pure and membership of the
Jacob sheep society followed.

The original ewes from the Wold View, Brewery and Osbaldwick flocks were joined by ewes from the Overdale and Henwick flocks. Zaripha Pharoah, a 4 horned ram bred by Mrs Cauldwell in Lincolnshire was purchased from Lady Wendy Lycett in Northumberland to act as a stock ram. Rams from the Gowanbank, Bentley, Hyndshaw and Glanrhos flocks as well as home bred rams have been used for breeding. The present stock ram is Bentley Competidor (Simply known as Dodger). 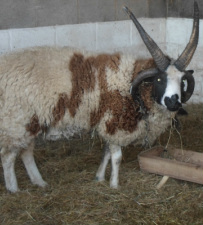